Ilm al-Ghayb and the Kufr of Barelwis

Why Are Our Duas Against Tyrants Not Being Accepted?

This page will be updated regularly insha-Allah…

THE YOUNG LAD WHO SUPERCEDED HIS PEERS

“Who do you regard (to be exemplars) in Hadith in Baghdad?”

“Who do you regard amongst us in Basrah?”

“Who do you regard in Kūfa?”

“There is not one from these who has not come to us and whom we have not seen. But I have not seen amongst the people anything like that young lad, Ahmad bin Hanbal.”

In Manāqib Ahmad of Ibn al-Jawzi, the narrator of the account adds:

“He made this statement to us (even) before Ahmad bin Hanbal was (famously) tried with the inquisition.”

It was asked of him:

“What made you know this?”

“I exchanged (Hadith reports) with him, and I acquired from him chapters (of knowledge).”

Ahmad ibn Hanbal (rahmatullahi alayh) passed by, having come back from Kufa, while in his hand was a satchel in which were books.

I took his hand and said:

“At one time it’s Kufa, at another it’s Basra…till when (will you continue like this)? When a man has already copied thirty thousand Hadith isn’t that enough for him?”

“(How about) Sixty thousand?”

“(How about) Hundred thousand?”

Then we looked (in his satchel), and lo and behold, we found that Ahmad had written 300,000 Hadiths from Bahz ibn Asad and Affaan alone.

My father resolved to set out for Makkah to complete the Islamic Hajj. He accompanied Yahya ibn Ma’een and said to him:

“We shall depart, insha-Allah, and complete our Hajj, then we shall proceed to Abdur Razzaaq in San’aa (more than a 1000 miles by foot) to listen (Hadith) from him.”

We entered Makkah and started out with the Tawaaf of arrival. It turned out that Abdur Razzaaq was performing Tawaaf (too). Yahya bin Maeen had seen him and recognised him.

Then Yahya bin Ma’een stood up, went to Abdur Razzaaq, gave him Salaam and said to him:

“This is your brother, Ahmad ibn Hanbal.”

“May Allah preserve him and make him firm in his resolve (for the Deen), for everything good has reached me about him.”

“We shall come to you tomorrow, insha-Allah, so that we can listen and write (Hadiths from you).”

(After) Abdur Razzaaq stood up then and left, my father asked Yahya ibn Ma’een:

“Why did you arrange a time with the Shaykh?”

“How would Allah view me that I had already made my Niyyah (intention to journey to San’aa for knowledge) and then I ruined it with what you suggested. I shall depart (from Makkah) and then listen to him.”

Thus he departed until he heard (Hadiths) from him at San’aa. 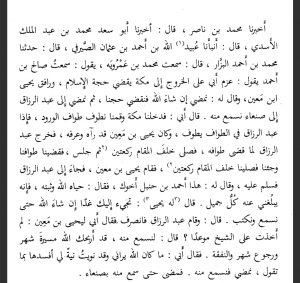 JOURNEYING FOR KNOWLEDGE AND LOVE FOR JUMUAH

“My father went all the way to Tartoos (approx. 600 miles away) walking, and he left for Yemen walking (1000+ miles), and he went for Hajj five times, three of which by walking. No one can say that they saw my father in these (distant) lands for a day (i.e. Friday) except that he went for Jumuah (even though Jumuah is not mandatory for even a traveller of only 48 miles.)”

Previous BURMA AND MUSLIMS
Next Signs of the Last Hour

The Meaning of Beautiful Character

Powered by WordPress | Designed by TieLabs
© Copyright 2022, All Rights Reserved